By Robin Nelson
Each Friday morning you’ll find 25-year-old Mona Minkara and Tina Gorske, her friend and driver, at the Greenway MTRA. They drive in from University of Florida, where Mona is a graduate student in chemistry.
“She knits and I talk,” says Tina, when asked how they spend their hour drive together from Gainesville to the Greenway facility. 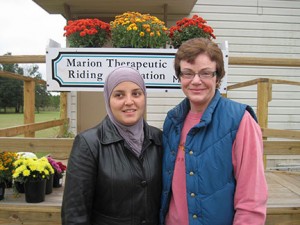 Mona is blind. Prior to coming to MTRA she had not ridden horses, but always had a desire to do so, saying that her great grandmother was known to be an accomplished equestrienne. Mona explained that she found out about MTRA through a meeting with former Director Kate Robbins when she was seated next to her on a flight home to Boston, MA.

“I sat next to the MTRA Program Director on the plane, and that’s how I found out about MTRA,” Mona explained. “I was really excited! I was looking forward to horseback riding. I love knowing there is an opportunity for people who are disabled to ride. Other programs hesitated to take me on.”

Once Mona returned back to Gainesville, she immediately began investigating how she could participate in the MTRA program. She met roadblocks at every turn. Transportation Services advised her they could not travel outside Alachua County. Florida for the Blind told Mona they were unable to accommodate her because the request did not relate to medical or educational needs. When Mona checked into taxi service she found it was far too expensive to travel into Marion County. Her last resort was a conversation with the University’s Director of Disability Services, Jim Gorske. Jim listened to Mona’s story about MTRA’s program and the obstacles Mona was encountering to getting transportation. He told her to give him some time to see what he could do.

“I could not believe it when Jim called me back and told me, ‘My wife is willing to take you,’” Mona said.

Jim’s wife, Tina, is a person who truly understands the effect disability can have on a person’s life. In addition to having knowledge through her husband’s work, Tina’s own life was significantly impacted by a recent car accident.

“When Jim came home and spoke about Mona, he told me she was friendly and very independent. She wanted to learn to ride, and I grew up riding horses in West Virginia. So I wanted to give someone else that same opportunity,” Tina explained. “I also wanted to have something worthwhile to do, and when Jim told me about Mona’s situation, I said, sure.”

Mona first three lessons have been a great success, which is no surprise to anyone who knows Mona. One of her MTRA instructors, Gail Dufresne, noted that, “By the end of her first lesson, Mona knew the size of the arena – she knew the long size, the short side, and she was perfectly balanced.”

When asked about her greatest challenge in her MTRA riding program so far, Mona is quick to say, “Being patient! I want to run – to gallop!” She describes her most special moment so far being when she was able to trot. “I love riding. I feel free. I’m a very sensory person, and I especially like the feeling of the wind on my face.”

So what are some of Mona’s goals? “Right now, attaining my PhD is my main goal. There are only three scientists in chemistry who are blind – and they are all men. So I’m very passionate about blind people in the sciences.”

As if that’s not enough, Mona participates in other projects. “I also do martial arts. And I taught myself to knit with YouTube, and I sell some things on line.”

Mona’s approach to life is to take it head-on. When asked for her recommendation as to how to handle the ups-and-downs we all encounter, Mona suggests, “When life puts you down, acknowledge, stand back, fix it, and then surround yourself with the things you love to do. It makes life so much easier.”

We also asked Mona what advice she has for people who do not have disabilities when they interact with persons who do have disabilities. “People have a subconscious response – from a good place in their heart – but they don’t feel uncomfortable. Just treat the person with the disability like they don’t have it. Treat them just like a regular person.”

When asked about the causes she cares about most right now, Mona told us, “A lot of things! But especially what I’m studying, which is finding a cure for H. pylori, which is a stomach bacteria that embeds in the stomach lining. I’m also passionate about some political issues, and as a Muslim in America, about people knowing no fear.”

Tina Gorske sums it up best. “Mona impresses me because her disability really isn’t a disability – it doesn’t hold her back. It amazes me what she does at a PhD level in a dominantly male field. Nothing is going to stop her.”

Mona is taking a sabbatical from riding as she is doing her graduate work. We hope to see her back soon!

To become involved with MTRA as a volunteer, click on “You Can Help” at the top of this page.

We can’t do it without you!

We are so grateful to our Sponsors and Donors for their continued support. Please thank them or patronize their businesses at every opportunity!